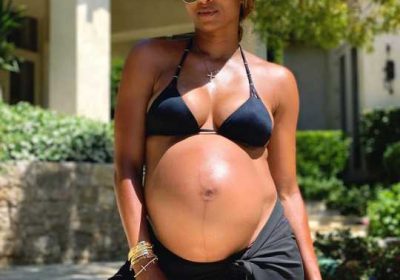 The Bump is Bumpin 🥰 The Bump is Bumpin 🥰

Ciara — who tied the knot with husband Russell Wilson in July 2016 — announced that she was expecting baby No. 3 on Jan. 30, sharing a photo of herself in a bikini on Instagram at the time, showing off her bare baby bump.

They revealed the sex of their baby on the way last month with a little help from daughter Sienna Princess, 3, and Ciara's son Future Zahir, who turns 6 on Tuesday.

While Future declared he was hoping for a baby brother, his "Goodies" singer mama said in the video posted to social media that she only hoped for "whatever God" had in mind for their family.

But Future got his wish. "YEAH!" the little boy screamed excitedly in the video shared to Wilson's Twitter account, running around the yard as soon as blue smoke and confetti filled the air.

Ciara and Wilson, 31, recently surprised a group of military moms-to-be during a virtual baby shower. The Zoom gathering, which involved about 50 pregnant service members or spouses stationed at Fort Hood Army Base in Texas, was put together by the USO, part of a series of baby showers the military support organization is hosting during the coronavirus global health crisis.

The location has special significance to Ciara: The Grammy-winner was born on Fort Hood and grew up on military bases because her father was a service member. She was scheduled to perform at the opening of Fort Hood's USO center on March 19, but the concert was postponed because of the pandemic.

"I am so grateful for you all and your sacrifices," she told the women. "I have a great connection to all of you for obvious reasons, being a military brat."

"There is nothing you all can't do," Ciara added to the expecting moms, whom she surprised with a gift pack and diaper pail. "Go and be the great mamas that you are."