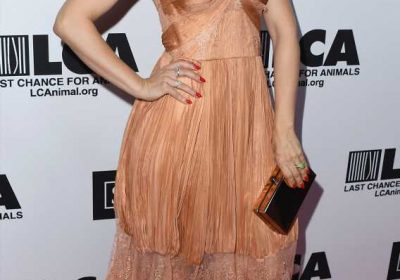 Mena Suvari is a mom!

Suvari, 42, announced her pregnancy news with PEOPLE back in October, opening up about how finding out she is expecting was a "very emotional experience."

"It's still this process for me of believing it and accepting that something this beautiful could happen for me," she said at the time. "It's been a very emotional experience. It's very weird finding out — I was like, I can't believe it!"

Want to get the biggest stories from PEOPLE every weekday? Subscribe to our new podcast, PEOPLE Every Day, to get the essential celebrity, entertainment and human interest news stories Monday through Friday.

Suvari and Hope tied the knot in 2018. Earlier last year, the couple decided to actively start trying for a baby — and what followed was months of ups and downs met with their fair share of disappointment.

"I was recording my temperature every morning and peeing on these ovulation sticks," she explained. "You expect that it'll happen and it didn't. I got to this place where I felt overwhelmed and stressed out."

Adding to the pressure to conceive quickly was Suvari's age. "I'm 41 and there's this air of like, I've got one foot in the grave and good luck," she said at the time, sharing that the mounting stress and continuous negative pregnancy tests made the actress finally take a step back.

"I was like, I can't do this anymore. I'm so tired of stressing over this. I was trying to feel like if it's meant, it's meant," she added. "I was being really open like the Aquarian that I am — if this is my path or not."

Not too long later, Suvari noticed changes in her body and learned that she was indeed expecting. She said, "It was something that we've always wanted, but a couple months before, I had stopped calculating. I pulled back and let go, which apparently they say that that's when it happens."

In the end, Suvari credits her ability to trust in her own body despite outside opinions on her maternal age.

"Even in my late 30s, I had people questioning me. It put a lot of fear in you," she said of becoming a mother later in life. "It took a lot of work to really pull back from that and really believe and trust in my own body and where I was at, have my own journey with it."

Suvari — whose memoir The Great Peace is out July 27 — also told PEOPLE at the time that she was excited about bonding with her baby boy. Her son's childhood, she promised, will be spent with present parents ready to soak up all the lessons he will teach them.

"I've always had this attitude of, I can't wait to get to know them. I just want to be like, who are you? Where do you come from? What do you have to teach me?" she said. "I want to give as much as I can and try to communicate as much as possible and be really present."

She joked, "But I don't want to be that helicopter parent! I feel like my husband is going to be the cool one and I'm going to be the one that's nervous about everything."

"I'm still falling into that place and just feeling so honored that he came to us," said Suvari. "It's all I ever wanted for years. Even before I met my husband, I always wanted a little boy and it just feels so beautiful and special."