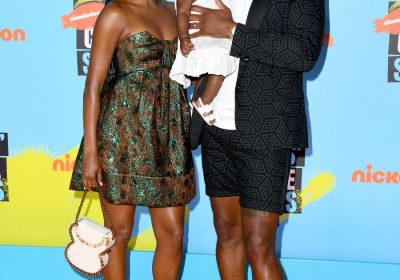 Gabrielle Union‘s baby girl Kaavia James was born to be a star!

On Thursday, the 8-month-old made her first red carpet appearance at the Nickelodeon Kids’ Choice Sports Awards alongside her parents Union, 46, and Dwyane Wade.

The family flashed wide smiles as they posed together with Wade, 37, holding little Kaavia in his arms.

Kaavia looked adorable in a white sundress paired with white sandals while her mom wore a peacock-patterned cocktail dress by Antonio Berardio and gold heels.

The actress had her hair styled in cornrows.

Union shared a photo from the awards show on her Instagram, captioning it, “Once upon a slime.”

She also posted clips from their red carpet moment on her Instagram Stories, which show Wade running up to his daughter in order to make her laugh.

The outing comes after Wade raved over Union at the ESPY Awards on Wednesday.

The former Miami Heat star was honored for his legendary career — alongside fellow retirees Lindsey Vonn and Rob Gronkowski — and made sure to give his wife of nearly five years a special shout-out.

“Before I start my speech, I have to say thank you to [New Orleans Saints quarterback] Drew Brees. Because of what you said to your wife onstage, my wife looked at me with a death stare, and said if I don’t say something up here, the car ride home is gonna be long,” Wade joked as the camera panned to a smiling Union. (Brees gave wife Brittany a sweet shout-out in his own acceptance speech, telling her he falls “more in love with [her] each and every day.”)

The star athlete continued with praise for the actress whom he married in August 2014.

“With that being said, darling, you are amazing. You looked incredible in this dress,” he said. “I cannot wait ‘til five years from now until I get a chance to marry you again. It’s gonna be a little lower budget than the first one, but it’s all good.”

The former NBA star proposed in December 2013 after four years of dating. He and Union tied the knot in a lavish ceremony in Miami in front of family and friends, including pal John Legend, who performed.

The couple welcomed baby Kaavia in November 2018 via surrogate. Wade is also dad to three sons and guardian to a nephew.

“He’s my best friend. All we do is laugh when we’re together,” Union told PEOPLE in 2017 of their marriage.