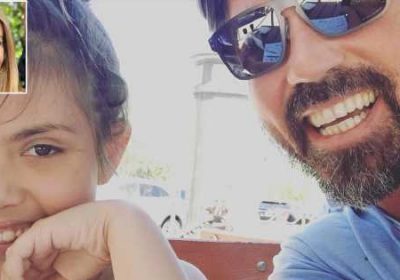 Denise Richards has hit the jackpot in love.

The Bold and the Beautiful and Real Housewives of Beverly Hills star visited The Talk on Friday, where she opened up about how “very lucky” she felt to be married to her husband, Aaron Phypers — who is the “best ever.”

“I think he’s having a harder time adapting to other things with me like my mouth that gets me in trouble,” the actress joked, revealing, “He’s amazing with my daughters and he’s adopting my youngest so it’s really great.”

Denise Richards Worries Fighting with Ex Charlie Sheen During Divorce Affected Their Daughters: “I F—ed Up a Lot”

Richards previously opened up about how Eloise, who will turn 8 on May 24, has a chromosomal disorder that “has caused a lot of developmental delays for her,” she told PEOPLE in February.

The star first noticed that Eloise wasn’t reaching typical milestones for babies, explaining, “She wasn’t able to sit up on her own for a very long time and she didn’t start walking until she was 2, and that was with physical therapy.”

Eloise was diagnosed with a deletion in chromosome 8 two and a half years ago, but Richards is still navigating best courses of care for her daughter.

“She can only say a handful of words,” said Richards, who has been married to Phypers since September. “And there are times when she feels like her age in understanding, and then other times where it feels she’s emotionally 3 years old. It’s been challenging.”

“I’m learning every day because they don’t really have a road map for her particular case,” Richards added.

As for her oldest daughter, the mother of three said in her Friday interview on The Talk that she is taking precautions in case Sam feels the need to rebel in an escape-artist-type way.

“I was half joking with her, but we’ve had cameras for security,” Richards said. “I used to sneak out, so I told her we’ll catch her if she does. She wasn’t too happy about it. No [we haven’t caught her yet], but we will.”