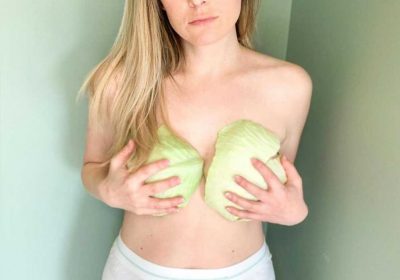 One week after giving birth, Carly Waddell is unapologetic in her choice to stop breastfeeding her newborn son.

Opening up to her followers, the newly minted mom-of-two, 34, revealed her decision Wednesday on Instagram, along with a photo of herself holding cabbage leaves on her chest in order to help soothe pains that come with engorged breasts.

“I had all these hopes and dreams that postpartum would be easier this time. But I still ache. I’m healing. I’m [tired],” she wrote in her caption.

The Bachelor in Paradise star and her husband Evan Bass welcomed son Charles “Charlie” Wolfe on Nov. 12. Since the little one joined the family, Waddell said it’s been a “beautiful and painful” learning experience.

Waddell described difficulties getting Charlie adapted to breastmilk, comparing the experience to the one she had with her firstborn, 20-month-old daughter Isabella “Bella” Evelyn.

Bella, she recalled, cried for months, vomiting and experiencing indigestion until Waddell made the switch to formula, which transformed the infant into a “new, happy little baby.”

Going against what she thought other moms would say was “best,” Waddell opted to try the same formula with Charlie to much success — since making the switch, she said Charlie is relaxed, able to sleep and smiling anew.

“This time, I had hopes that Charlie would be different. But it just isn’t the case,” she wrote. “I decided to stop breastfeeding and try him on the same formula Bella was on, and within a bottle or two he was so happy.”

RELATED: Carly Waddell Reveals She Helped Deliver Her Own Baby During a ‘Beautiful and Unique’ Birth

Waddell said she didn’t let the expected backlash that she fully anticipated sway her decision-making process when it came to what worked best for her child.

“There is such a stigma about breastfeeding,” she explained. “If you don’t do it, you don’t care about your children’s health. You don’t love you kids enough. You’re being selfish. You just aren’t being a good enough mom.”

She continued: “But the one huge thing I found this time is that I made a really hard decision within myself as a mom to listen to my gut about what was best for my child. And you know what…it worked. He is soooo happy and that is all that matters.”