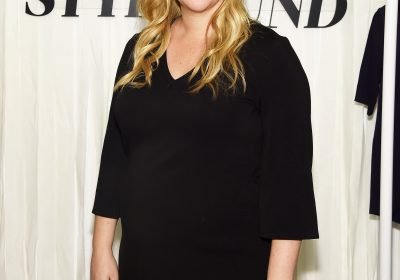 Amy Schumer is cancelling her comedy tour due to pregnancy complications.

Schumer, 37, revealed the news on Instagram Friday, explaining it was due to hyperemesis gravidarum — a form of acute morning sickness that the actress has been battling throughout her pregnancy.

Schumer announced in October that she and her husband Chris Fischer are expecting their first child.

“Due to complications from hyperemesis I am not cleared to fly for the next couple of weeks I am going to cancel the remainder of my tour. Refunds are available at point of purchase,” the I Feel Pretty star wrote.

“The baby and I are healthy and everything looks good. But I am in my 3rd trimester and I am still nauseous all the time and vomiting.”

“I vomit mostly every time I ride in a car even for 5 minutes,” Schumer explained.

“I have a pretty good attitude about it and some days I feel good for a couple hours. But mostly it’s sucks [sic]. I wanted to push through and do my shows. Because I hate letting people down and I love stand up and money! But more than that I have to think about my health and the baby.”

“I know you guys get it and people are like. Bitch are you ok? Take it easy but it’s still embarrassing to have to cancel.”

This isn’t the first Schumer’s had to cancel her work obligations while pregnant.

In November, Schumer apologized to fans once again in Texas after having to scrap her Dallas tour stop after being hospitalized due to hyperemesis.

“Texas I am so deeply sorry. I have been really looking forward to these shows. I have to reschedule,” Schumer captioned a photo of herself on a stretcher. “I am in the hospital. I’m fine. Baby’s fine but everyone who says the 2nd trimester is better is not telling the full story.”

“I’ve been even more ill this trimester. I have hyperemesis and it blows,” she admitted. “Very lucky to be pregnant but this is some bulls—! Sending so much love to the doctors and nurses taking great care of me and [my dog] Tati! They are cool as hell! And Texas I am really really sorry and I’ll be out there as soon as I’m better.”

Despite her struggles, Schumer has managed to keep a positive disposition.

A month after revealing she had been hospitalized the expectant actress and comedian shared a new photo to Instagram that gave followers an honest look into her life as of late.

The snapshot showed Schumer lounging on a couch, hooked up to an IV that led to a bag of fluids behind her.

“Am I glowing? #hyperemesisgravidarum,” the mom-to-be humorously captioned her post.

Nonetheless, not all days are bad.

In the first video Schumer posted, the comedian can be seen running up to a line of dancing women, who were preparing for the upcoming parades of carnival season, which kicked off in January.

Schumer positioned herself at the back of the group and copied their moves almost exactly — the locals didn’t even notice!

In the next clip, Schumer found a different group of women to dance with.

“Sometimes you have to do it twice in one day with different groups,” Schumer wrote adding the hashtag “#Nola.”