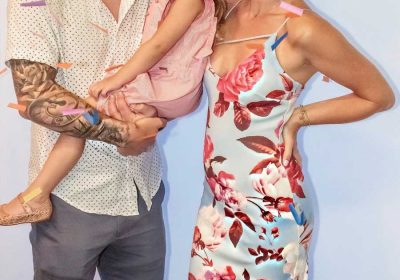 Kimberly Caldwell is adding another member to her family!

“My husband, daughter and I are so thrilled to attend the Biggest Family Shower Ever to announce our new addition to the family,” says Caldwell, who also shares 3½-year-old daughter Harlow Monroe with Harvey, 35. “We are overjoyed with the news of a sweet baby on the way and ready to celebrate in a BIG way!”

“Can’t wait to spread the news on my NBC show California Live with all of our viewers on Monday at 11:30 a.m.! Time to shout it from the rooftops,” she adds. “So proud to finally rock this little bump!”

Caldwell shares with PEOPLE that her little one on the way is due to make their arrival on Feb. 27, 2020.

Kimberly Caldwell and Husband Jordan Harvey’s Romantic Maternity Shoot: “It Was So Empowering to Celebrate My Bump”

Caldwell tied the knot with longtime love Harvey, a professional soccer player for Los Angeles FC, in December 2014 in Palm Springs, California, her rep confirmed exclusively to PEOPLE at the time.

Celebrating their nuptials at an intimate reception with their family and friends immediately following the ceremony, the bride looked stunning in a custom mermaid-style Walter Mendez dress.

The duo welcomed their daughter the following October, telling PEOPLE they had been “preparing most of 2015 for this day to bring our baby girl home to her princess nursery.”

“My husband was so cute driving his girls home extra slow with extreme caution,” she added. “Our hearts are filled with overwhelming love and joy and soaking up every second of falling in love with baby Harlow.”

In an interview with PEOPLE weeks after welcoming her first child, the Without Regret musician reflected on the difficulties of new motherhood — and how Harvey was “so patient with” their daughter.

“She had given me a crazy long night the night before [a soccer match], but she was the best baby ever at the game. She slept through the entire thing and didn’t cry at all,” Caldwell said at the time. “I actually took her out on the field and he did a walk around with her with the team and all the fans so everyone got to see her. She was just so sweet. You could see he’s beaming.”

But “as great a baby” as Harlow was in her temperament, “no matter what, you’ll never get caught up with your sleep,” Caldwell added.

“I feel like everybody sugarcoats [new parenthood] because they don’t want to sound ungrateful because we just couldn’t be happier, but at the same time, it really is a challenge,” she explained. “But it’s the greatest challenge and we’re up for it.”