What Lab-Engineered ‘Naturals’ Mean for the Beauty Industry 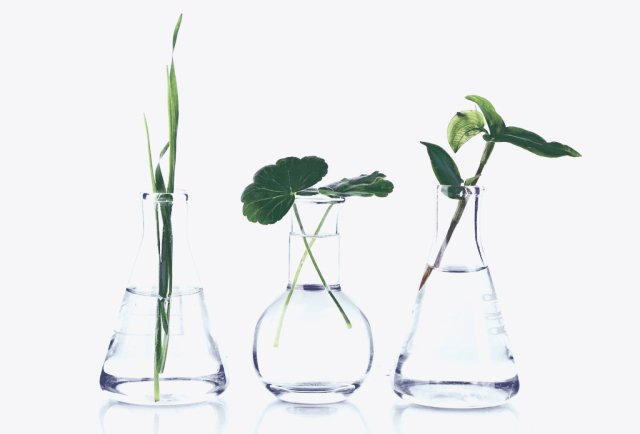 How Beauty Brands are Using Proprietary Molecules
On a quest for differentiation, beauty companies are licensing and testing new, potentially more effective molecules for their product formulations.
Here, we look at two different ways companies are differentiating their formulations. At Nerium, the direct-selling beauty business, several key products — including the popular Eye-V Moisture Boost Hydrogel Patches — contain molecules that the business licenses from Signum Biosciences. Over at Living Proof, the strategy is one of internal development. The business has a group of non-beauty scientists working to create materials that primarily work well with hair, but could have other uses.
Signum Biosciences' Nerium Molecules
Nerium, the social-selling company, uses several exclusive ingredients from Signum Biosciences in its formulations, called Sig 1273 and Sig 1191. Sig 1273 is used in antiaging night and day creams, and Sig 1191 is in the Nerium's eye serum and eye patches, according to Maxwell Stock, president and ceo of Signum. Both, according to Stock, are considered natural.
The molecules were developed out of research that Stock's father, the company's founder (also named Maxwell Stock), had done on G proteins. He determined that those proteins affected behavior of certain cells, and had the idea that they could be used for skin-care technology. "In terms of building additional molecules from that starting point — G proteins are very well known — the novelty was that he copied what was already present in nature," Stock said.
How Living Proof's Team Honed WBPU
At hair-care company Living Proof, which is stocked with an unusual number of research and development staff, the goal was to optimize WBPU (Waterborne Polyurethane). "It's a widely used material in personal care, hair care, skin care and the medical fields — but when we really studied WBPU we realized the material is not fully optimized and not well designed to bring out perfect performance on hair," said Soo-Young Kang, senior director of research for the business.
Kang, who joined Living Proof after working in cancer research, public health and drug discovery, is part of an R&D team that joined from scientific fields that had nothing to do with beauty.
The team created 300 different versions of WBPU and studied their performance. "We tested in our lab, and finally understood the key parameters governing the material properties that are optimal for hair application," Kang said. "Our focus is obviously hair application, but this material has a bigger opportunity…this can be used for skin and this same invention can apply for different industries, like surface coating and potentially textiles — there could be a medical application — this is just the beginning."
Source: Read Full Article