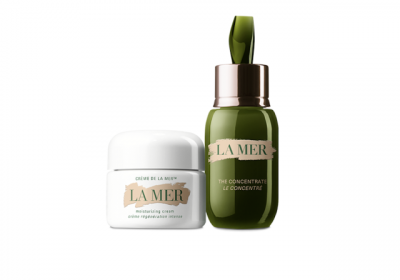 La Mer has signed celebrity aesthetician Georgia Louise as global skin-care adviser — and together, they're going to the Oscars.
On Feb. 22 the brand and Louise are providing an exclusive treatment she has designed for a handful of guests. And on Feb. 21, La Mer will be in the Oscars Suite. It's all a part of the brand's plan to get in front of more eyes, including the celebrity kind.
Historically, La Mer has not been a marketing machine. The brand long relied on word of mouth for sales, but in recent years, has modernized marketing to include influencers, makeup artists and celebrity relationships. Louise, who has more than 36,000 followers on Instagram and counts Emily Blunt, Anne Hathaway, Emma Stone and Emilia Clarke as clients, joins the brand after makeup artists Patrick Ta and Mary Phillips, who serve as ambassadors.
As part of the partnership with La Mer, Louise will carry products from the brand, including The Concentrate and Crème, at her Upper East Side Atelier (and at her Los Angeles Atelier when it opens in June). She'll also work with La Mer to develop treatments and counter-service protocols. Louise is expected to make appearances in Europe and Asian markets as part of the partnership, as well as Saks Fifth Avenue and Bergdorf Goodman, where La Mer is opening two treatment rooms.
"To be able to lean on them as partners and together create incredible treatments is at the heart of this partnership," Louise said. She and the brand have partnered to create a facial that includes light and sound — key elements in the development of La Mer's signature Miracle Broth ingredient — into facial treatments. The Oscar treatments Louise is doing, for example, will include red and blue LED lights, coupled with a massage technique, oxygen treatment and the use of La Mer products, Louise said.
The brand sent Oscar nominees in the best actor, best actress and best director categories the Crème in its largest size, personalized with Swarovski crystals.
"We're not a brand that does things broadly," said Kendal Ascher, vice president and general manager of La Mer North America. "It's not 'cater to the masses and try to get share of market and volume,' it's 'love the customers you have and really spoil and pamper them so they feel like they're part of a club.'"
The Oscars fanfare coincides with La Mer's relaunch of The Concentrate — its quiet hero product. Most people know the brand for its luxury moisturizer, Crème de la Mer, which retails for $325 for 2 ounces (the size sent to the Oscar nominees retails for $2,160). But The Concentrate, launched in 2003, is a sleeper hit, according to Ascher, who said it is in the company's top five stockkeeping units.
"It's the quiet cult product that everybody uses, but nobody knows unless somebody tells you about it," he said.
That under-the-radar status exists because The Concentrate, $370 for 1 oz., has never been the focus of brand advertising efforts. But this spring, that is changing, and a reformulated version of The Concentrate will hit the market March 1. Industry sources estimate that with marketing efforts behind it, The Concentrate could do about $40 million in North American retail sales in one year.
"We added in a new stabilizing ferment to the product which helps to rebalance and center your skin and make it stronger," Ascher said. "That became the new proposition for the product, thus the reason we put it in a new package and we decided to put effort behind it from a sampling and digital media perspective."
The packaging includes a kelp-shaped topper, a reference to the brand's Miracle Broth hero ingredient, which comes from kelp. The relaunch includes a marketing campaign that will seed product with about 300 influencers of different levels.
For La Mer, that influencer program and partnership with Louise come as the brand looks to broaden its reach to younger consumers. La Mer dominates the luxury skin-care market in the U.S. and sells its full range through its department store partners, but has also started experimenting with Sephora, for example, where it's finding an average customer of age 34. It's also started to create smaller (less expensive) sizes of products, which are luring first-timers to the line.
The bestseller is the 15-ml. $85 Crème, according to the brand. And at Sephora, "the second product they buy is a full-priced eye cream," Asher added.
Source: Read Full Article