Women who get anaemia early in pregnancy are more likely to have children with autism, a study suggests.

The condition – common in mothers-to-be – is also linked to higher rates of ADHD and intellectual disabilities in children.

But the scientists found the chances were no greater in mothers who received an anaemia diagnosis later on in their pregnancy – after 30 weeks.

It is believed iron may play an important role in the development of a foetuses’ brain, particularly in a ‘critical window’ before 30 weeks, the scientists said. 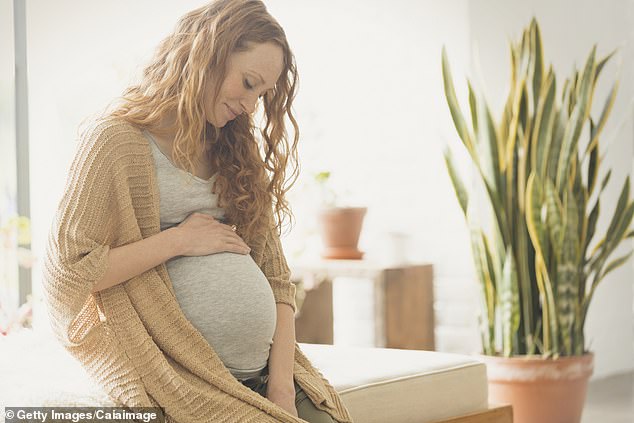 Women who suffer from common complication of anaemia during 31 weeks of pregnancy are more likely to have children with autism, according to a study by researchers in Sweden

Anaemia is a lowered ability of the blood to carry oxygen and is most often caused by an iron deficiency.

Adult women typically need 15mg of iron per day, though needs may increase later in pregnancy because the body uses iron to make extra blood for the baby.

Up to 20 per cent of pregnant women worldwide suffer from anaemia, according to estimates.

Almost six per cent of mothers in the study were diagnosed with anaemia – less than one per cent of which were in the first 31 weeks of pregnancy.

The researchers at Karolinska Institutet took into account other factors thought to affect the risk of anaemia, including maternal age.

Iron is important for the production of red blood cells, which carry oxygen around the body.

A lack of iron can cause anaemia.

The Department of Health states most people should be able to get all of their iron intake from their diet.

How much iron do people need a day?

Women with heavy periods, or those who are pregnant, may require supplements.

Iron intakes of more than 20mg a day can lead to constipation, nausea, vomiting and abdominal pain.

Very high doses can be fatal, particularly in children, therefore iron supplements should be kept out of youngsters’ reach.

Results showed mothers with early anaemia were 44 per cent more likely to have children higher compared to children with non-anemic mothers.

The risk of ADHD was 37 per cent higher, and the risk of intellectual disability was 120 per cent greater, results showed.

Someone with an intellectual disability may struggle to learn, problem solve, communicate or do day-to-day skills.

A total of 9.3 per cent were diagnosed with ADHD. In contrast, the figure was just 7.1 per cent in children born to healthy mothers.

And 3.1 per cent were diagnosed with an intellectual disability, compared to 1.3 per cent of children to non-anaemic mothers.

Anaemia diagnosed after the 30th week of pregnancy did not have any risks, the researchers wrote in the journal JAMA Psychiatry.

Lead researcher Dr Renee Gardner said: ‘A diagnosis of anaemia earlier in pregnancy might represent a more severe and long-lasting nutrition deficiency for the foetus.

‘Different parts of the brain and nervous system develop at different times during pregnancy.

‘So an earlier exposure to anemia might affect the brain differently compared to a later exposure.’

Dr James Findon, a lecturer in psychology at the Institute of Psychiatry, Psychology and Neuroscience, King’s College London, said: ‘This study supports previous work suggesting a link between maternal iron deficiency and autism.

‘That said, this study does not provide evidence of “cause and effect”.

‘We know that iron is very important in brain development and that iron deficiency during pregnancy is associated with poorer developmental outcomes.’

Previous studies have discovered an iron deficiency early in life can impair a child’s motor, language and behavioural development.

Iron is necessary for the development for some neurotransmitters, which may be impaired in the brains of those with autism and ADHD.

Current UK guidance says iron supplements should only be considered if pregnancy blood tests show that the mother is anaemic.

But the authors believe the findings underscore the importance of screening women to measure their iron levels in order to prevent anaemia.

According to the figures, the vast majority of anaemia diagnoses are made toward the end of pregnancy, when the rapidly growing foetus takes up a lot of iron from the mother.

The findings support previous studies, such as one by the University of California in 2014, published in The American Journal of Epidemiology.

Researchers found that taking iron supplements in pregnancy may reduce the risk of having a child with autism.

It was also revealed that mothers 35 years of age and older who had low iron intake had a five times greater risk of having a child with autism.